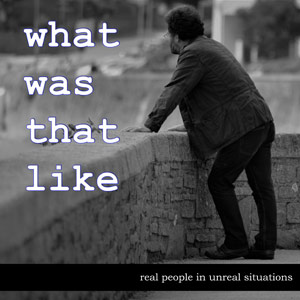 Have you ever been listening to someone telling a story, maybe a true story about something that happened to them, and what they were saying was just so incredible you could hardly believe it? Or maybe you’re driving along in your car listening to a podcast, or maybe you’re listening to someone talking on the radio, and what they’re talking about is really intriguing, and even though you’ve actually gotten back home and you’re sitting in your driveway, you can’t turn it off and get out of the car, because you just have to hear the rest of it.

That’s the kind of story I want to have on each episode of this podcast.

On this show, I’ll be having a conversation with someone who has found themselves in an extremely unusual situation. A situation that they never expected to be in, but there they were. Maybe the spot was a scary one, like they were taken hostage during a bank robbery, or maybe they survived a plane crash. Or maybe it’s a really happy situation, like they won millions of dollars in the lottery. The possibilities are endless, because there are so many people with so many incredible stories out there.

Whatever my guest has been through, I want to get them to tell that story. I have a natural curiosity so I have lots of questions to ask. My goal, just like the name of this podcast, is to find out – What Was That Like. I hope you enjoy it.

There are a few other things I want you to know about this show.

First off, there won’t be a long intro and other junk that you have to fast forward through in order to get to the good stuff. We’ll get right into the story. And all of the typical stuff about how to contact me, how to subscribe, social media, all that stuff is going to be at the END of each episode rather than at the beginning.

There WILL be a content warning at the beginning of each show, just like you heard at the opening of this episode. Some of the topics we’ll be discussing, just by nature, aren’t appropriate for those that are sensitive, or younger listeners, so I want you to be aware of that from the start.

As far as how often I’ll put out a show, right now I can’t really tell you. I don’t want to commit to a particular time like once a week or twice a month yet, because I just don’t know. Obviously, that’s a good reason to subscribe to the show, so that you’ll have it on your device as soon as it gets released and you’ll never miss an episode.

And now that I’ve told you what to expect, I’ll say this: it might change. In fact, there are some aspects of the show that probably WILL change, since that’s kind of the nature of how a podcast evolves over time. Any changes I make to the format or the content will hopefully mean the show is improving. I’ll count on you to let me know what you think.

If you want to contact me, you can send a message through the website, which is whatwasthatlike.com, or you can email me at Scott@whatwasthatlike.com. I’d love to hear what you think about the show, as well as any suggestions for guests to have on. Maybe YOU have a story that we should talk about. I’ll tell you up front, though – it’s gonna have to be a pretty amazing and unusual story to be on this show.

So thanks again for listening, and I hope you enjoy each episode.

Comments are closed, but trackbacks and pingbacks are open.