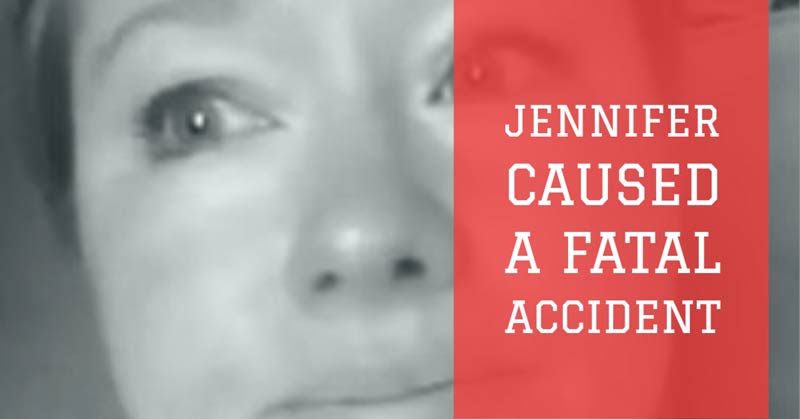 For Jennifer and her husband Chris, and their 4 children, it was just a regular Tuesday. Up until around 8 pm that evening. Jen was driving home and she had their two daughters in the car, ages 12 and 4.

Jen stopped at a stop sign, and then proceeded into the intersection without seeing the motorcycle that was approaching on her left. The motorcycle hit her car, and with that collision, the lives of two families were forever changed. David, the driver of the motorcycle, was taken to the hospital, where he died two days later.

In my conversation with Jen, we talk about a lot of different aspects of what happened. She told me a little of what life was like before the accident, and she described what happened from the moment of impact and the hours and days that followed. We discussed her feelings of guilt at being responsible for the death of a person, her overwhelming sadness that it happened, her fear of what was going to happen to her from a legal or criminal standpoint, and what happened when she had a chance encounter with one of David’s friends. She also talked about what she’s doing today to help others who have found themselves in similar situations.

There’s actually an acronym for someone who has gone through this. That person is called a CADI, which  stands for “Caused Accidental Death or Injury”. You’ll hear Jen use that acronym during our conversation.

Also, a warning. Around 14 minutes into our conversation, you’ll also hear the actual recording of the 911 call that Jen made at the time of the accident. In the beginning she’s on the phone with the 911 operator, then she hands the phone to a man who was also on the scene, and he talks to the operator briefly. Following that is a second 911 call from a female. Again, this is about 14 minutes after our conversation starts, so if you might find the intensity of that audio to be upsetting, you can fast forward about 4 minutes to skip past that.

One of the takeaways from this conversation is that it’s good to see things from a different perspective. You know we hear about accidents like this almost every day, and it’s really easy to assume that the person is just some selfish jerk who was talking on their phone, or texting, or just not paying attention, even though we really don’t know what actually happened. Sometimes those assumptions are true, but not always. Today we get to hear the other side of that story.

Some of the resources discussed in this episode:

If you’d like to contact Jen directly with questions or comments, you can email her at beautifullybrokenblog16@gmail.com.