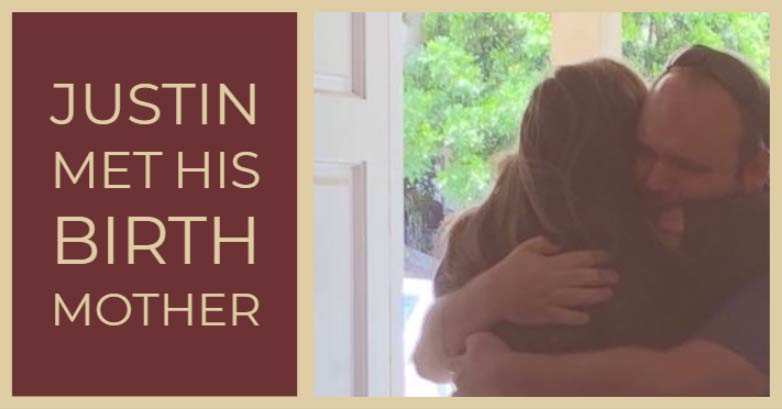 Have you ever had one of those moments in your life where your life just changed dramatically?Like, your life is suddenly divided into two chapters – before that moment, and after that moment.

Well, that’s the kind of moment Justin had recently.

Justin was adopted the day after he was born. So he never knew his birth mother. He was adopted immediately into a loving family who gave him a wonderful childhood and a great start in life.

And now he’s 26 years old and making a life of his own, but he always wondered about his birth mother, and he searched and searched for her. And at the same time, she was wondering about him, and hoping they would eventually connect again.

Then, just a couple of months ago, they finally found each other. This is the story of how that happened.

I’m not really gonna tell you a lot here ahead of time, because Justin tells the story himself so wonderfully. But I do want to let you know a couple of things.

And the other thing is this. Partway through the interview, I kind of surprised Justin with something. Before he and I talked, I got in touch with Heather, his birth mom, and she recorded an audio message to him for me to play during our conversation. Justin wasn’t aware of that until I told him, while we were talking. You’re gonna love it.

A big part of the reason Justin wanted to come on the podcast is to encourage other people who have been adopted to try to find their birth parents or other biological family members. It’s true it might be a little scary because you don’t really know what’s gonna happen, but Justin says you should still take that step and make the effort to do it.

If you want to get in touch with Justin, you can email him at davisjustin053@gmail.com.