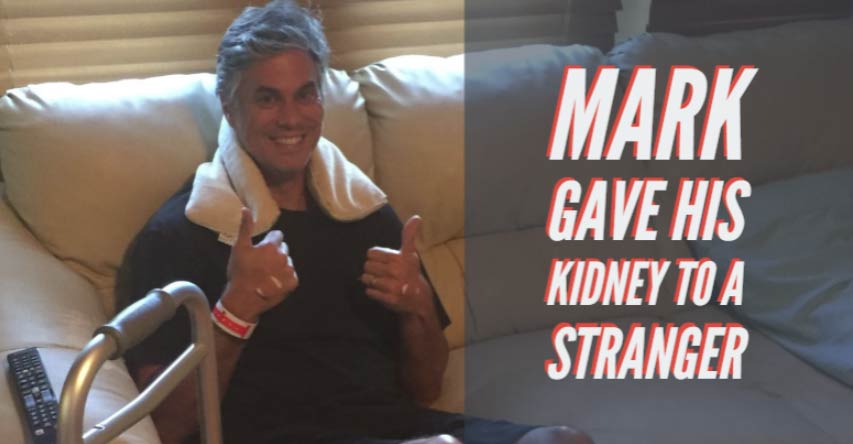 Mark gave his kidney to a stranger

What kind of person gives one of his own kidneys to a total stranger? Well, you’re about to find out.

Mark works as an attorney here in the Tampa Bay area so he’s actually not too far from where I live, but that’s actually just a coincidence. I heard about his story and contacted him because I knew it would be interesting, and I had lots of questions for him.

I wanted to know how he found out about this person who needed a kidney, if they actually met in person, and what lead him to make the decision to actually do something like this for someone he didn’t even know. I also wanted to ask him about his own risk assessment – since he only has one kidney himself now, what if that one fails? What if HE needs a kidney later on.

We also talked about the actual process – the testing, the surgery, the recovery, all the details. So if you’ve ever thought about donating a kidney to someone, this will give you the kind of overall information about what you might expect.

If you want to contact Mark, his email address is mark.rankin74@gmail.com.

Tampa General Hospital Living Kidney Donor Program (outside of the Tampa Bay area, contact your local hospital to ask about their own kidney donor program)

Animated video of how a kidney is put in the recipient

There’s a huge need for this, and most of us are walking around with the ability to literally save someone’s life. For me, it’s just kind of hard to ignore that, especially after this conversation. I definitely learned a few things, and I hope you do too.