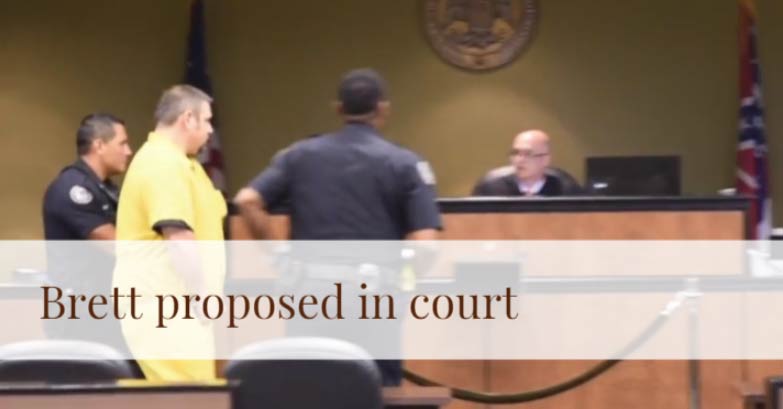 The story you’re about to hear, I love it and I think you will too. It’s about two people. One of them is Tiffany, who is a probation officer. That means she sometimes works in a courtroom.

The other person is Brett. Brett and Tiffany started dating a couple of years ago and ended up falling in love with each other.

So recently, it came time for Brett to pop that all-important question. And even though they had talked about marriage, so it was already on both of their minds, Brett wanted to propose in such a way that it would take Tiffany completely by surprise. I think it’s safe to say he succeeded.

Brett conspired with some of Tiffany’s co-workers from the courthouse, including the judge, and came up with a plan. He would be dressed in a prisoner jumpsuit, handcuffed, and brought in to the courtroom by deputies to appear before the judge. And Tiffany would have a front-row seat to see it all happen.

And the nice thing is, the whole thing was recorded so YOU can see how it happened too. A couple of videos are below.

I love a great prank, and to me, a great prank has to have a couple of elements. First, it has to be something that is planned out in detail. And second, it has to be one that has everyone feeling good about it afterward. This one definitely is both.

I talked with Brett about how he planned this, how he worked with the people at the courthouse, how he felt when it was actually happening, and the publicity it has received. People really love this story.

And I also got some insight from Tiffany about what was going through her mind as the whole thing played out right in front of her.

If you want to contact Brett, he can be reached at brettedwards81@hotmail.com.