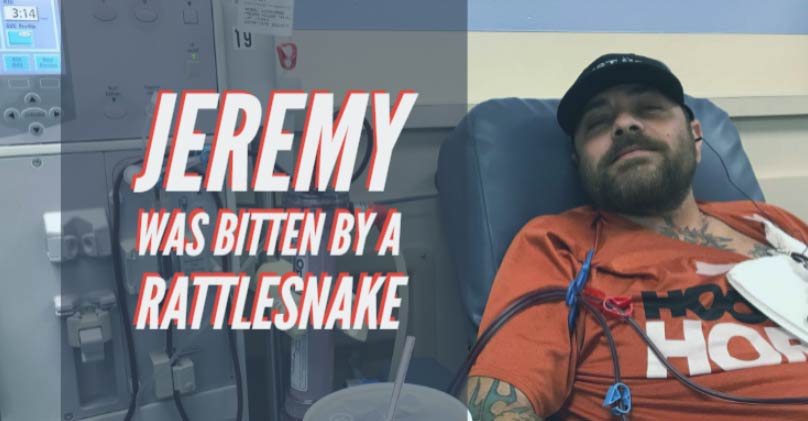 Jeremy was bitten by a rattlesnake

Jeremy lives near Corpus Christi, Texas with his wife Jennifer. In May of 2018, just a few months ago, they experienced a day that neither of them will ever forget.

This was on a Sunday, about [10:30] in the morning, and they were getting ready for a family barbecue that was going to happen at their house that afternoon. Jennifer was working in their rock garden, and came across an aggressive snake. But it wasn’t just any snake – this was a Western Diamondback rattlesnake.

She called out for Jeremy, and he quickly got a shovel and swung down on the snake, and chopped off its head. And of course, if that were the end of the story, it wouldn’t really be much of a story, right?

A few minutes later, Jennifer is about to let the dogs out in the yard, so Jeremy knows he needs to dispose of the dead snake. As he reaches for a nearby stick, the severed head of that rattlesnake jumps toward him and bites down on his right hand.

Jeremy immediately yelled for Jennifer that he’s been bit, and he struggles to pry open the jaws of the snake to get it off his hand – all the while feeling the pulsation of the deadly venom that’s being pumped into him.

Jennifer called 911 and they got in the car to meet the ambulance a couple of miles down the road, just to save some time.

I’ll let Jeremy tell it, but what I find fascinating about this story is how life can end so suddenly and without warning. I mean, Jeremy was just doing routine yard work on a Sunday morning, and literally within 15 or 20 minutes, he’s waiting for an ambulance to show up, and he’s thinking there’s a good chance he’s about to die, and he’s saying his last goodbyes to his wife and daughter. Just incredible.

Partway through the conversation we’ll hear from Jennifer, and the fact that she’s a nurse I think played a big part in Jeremy being able to survive this.

If you want to contact Jeremy, his email is Jeremy_sutcliffe@yahoo.com.

And you can see additional pictures about this story on my Instagram, which is @WhatWasThatLike.