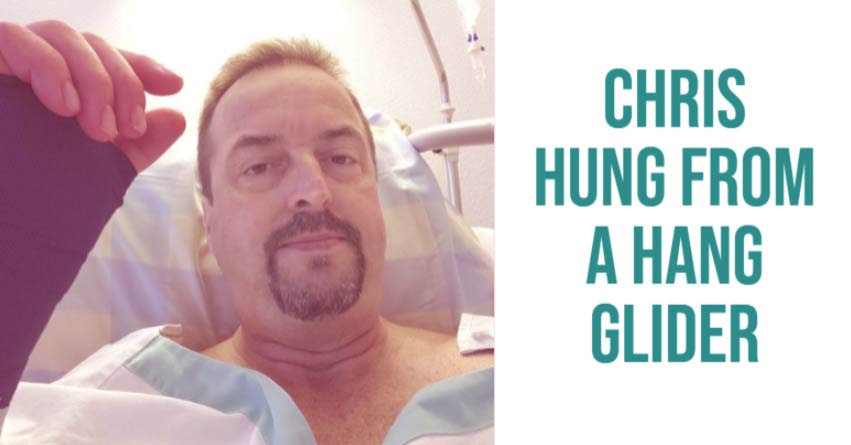 Chris hung from a hang glider

Every year, thousands of people all over the world go hang gliding.

Some people are experienced and pretty serious about the sport, and they own their own gliders and other equipment. And there are others who are just kind of curious about what it feels like to soar through the air silently, with the only sound being the wind in your face.

Chris was in that second category. He and his wife Gail live here in Florida, and they were vacationing in Switzerland recently, and they booked a hang gliding adventure. And since neither of them had ever done any hang gliding, they would each have their own pilot who would be handling the glider. So two hang gliders – Gail and her pilot in one, and Chris with his pilot in the other one.

They climb to the top of a big hill, and Christ gets his harness on just as instructed. When the wind is just right, he and his pilot go running down the hill and within seconds they are airborne and gaining altitude quickly.

Only one problem – Chris was not attached in any way to the hang glider. The pilot had somehow forgotten that critical part of the process. So Chris is literally hanging by his hands while they’re thousands of feet in the air, as the pilot tries desperately to land as quickly as he can. Makes you want to go hang gliding, right?

Chris had his GoPro camera attached to the back of the glider so you can see the whole thing as it happens, in this video:

In our conversation for the podcast, Chris told me the whole story. He’s really lucky to be alive. And he answered my big question – does he want to hang gliding again?