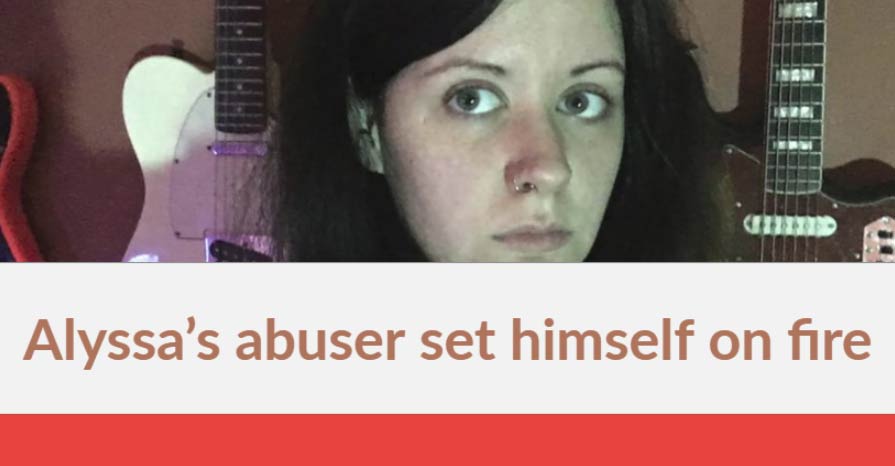 Alyssa’s abuser set himself on fire

In the United States, 1 out of 3 women have experienced some form of physical violence by an intimate partner. Alyssa Moore WAS that one out of three.

Alyssa lives in Tennessee, and she’s a musician, a songwriter, and an audio engineer. She was also a victim of physical and emotional abuse from her boyfriend, Jared McLemore. One day, at her request, police put out a warrant for his arrest. That night, while she was at work setting up audio at a bar called Murphy’s (in midtown Memphis), Alyssa got a notification on her phone that Jared was doing a Facebook Live video. What she didn’t realize is that Jared was doing this just outside the bar where she was working. Within a few minutes, Jared had covered himself in gasoline, and set himself on fire. Hundreds of people saw it live on Facebook. Alyssa saw it live in person. Jared died shortly after that from his injuries.

Alyssa told me about Jared, what drew her to him, about their relationship, and how she handled his death. And how she is enjoying her new sense of freedom.

In the video below, you can see the Facebook Live video that Jared created that night. This  video will not be suitable for everyone, so view it at your own discretion. (alternate video link)

Below are some of the resources that Alyssa talks about that are available to help domestic violence victims.