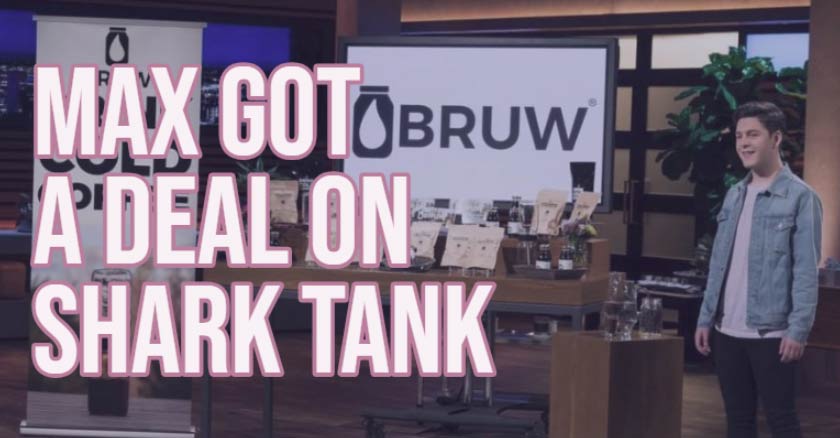 Max got a deal on Shark Tank

This episode is a fun one for me. I’m an entrepreneur, so I love watching Shark Tank. If you’re not familiar with the show, it’s where some regular person

who has the beginnings of a business comes on and pitches the idea to 5 investors, called Sharks. The investors ask questions and decide if they want to become partners with that person and invest in the business.

Some of the people who have gone on there have gotten deals and gone on to great success. Others have gotten no deal, but perhaps some constructive criticism and encouragement. And then there are others that have just gotten criticism. And of course that’s part of what makes it entertaining.

But my conversation today is with a young business man named Max, and in his case, the investment in his business DID happen. Max is a 19 year old college student, and he has developed a cold-brew coffee filter that he hopes will soon become a household product and introduce lots of people to the idea of cold-brew coffee.

And it turns out Mark Cuban, who’s one of the sharks and is also a billionaire investor who owns the Dallas Mavericks basketball team, also thought the product has potential, so he and Max are now partners in this venture. And I agree, it’s a pretty clever idea.

As you’ll tell from our conversation, Max is a really bright kid and he’s got a tremendous future. I loved talking with him, and really I liked kind of getting the perspective of someone that has actually gone on that show – how he prepared for it, how he got the deal, and what’s happened since then. Going on a show like this to pitch your idea to investors is one of those things that’s part exhilarating and part terrifying.

If you want to watch the episode with Max, it’s this current season of Shark Tank, which is Season 10, and he’s on episode 9. It aired on January 6, 2019.

To connect with Max:

And as always, I’d love to hear what you think of this episode! Email me at Scott@WhatWasThatLike.com.