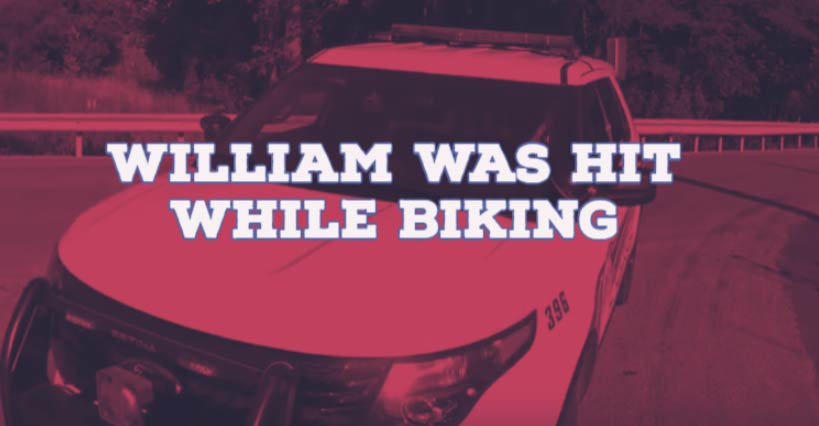 William was hit while biking

Today’s story happened last summer – July of 2018. William was out riding his bike.

He came up to an intersection where he had a stop sign, and had to turn either left or right. While he was stopped at that intersection, a car approached from his right, and turned left – coming straight at him.

What makes this story interesting is that the driver of that car didn’t see William sitting on his bike at that intersection, because the driver was looking down at his phone. He didn’t look up in time, and he drove right into William and his bike. William was knocked to the ground, and his bike was destroyed.

Oh, and there’s another part of this story that makes it even more interesting. The driver of that car was a police officer, and he was on duty driving his police cruiser.

Like a lot of cyclists, William has an action cam mounted on his helmet. So when this crash happened, the camera was rolling so the whole thing is on video. This video has been viewed over 11 million times:

This was a pretty interesting conversation. We talked about William’s high-end bike that was destroyed, the camera he uses when he’s biking, what happened when he got hit, who paid for his bike, as well as the coverage for his injuries. You’ll see in the video, the police officer that crashed into him two different times told him, “You’re fine”. But he wasn’t actually fine.

This is the other video we discussed, with his interaction with one of the EMTs:

Now, William has a new bike and a new camera. And that police officer is no longer an officer with that police department.

Like the podcast? I invite you to become a supporter, and get all the bonus, exclusive episodes (911 audio and the stories that go with those calls) at WhatWasThatLike.com/support.