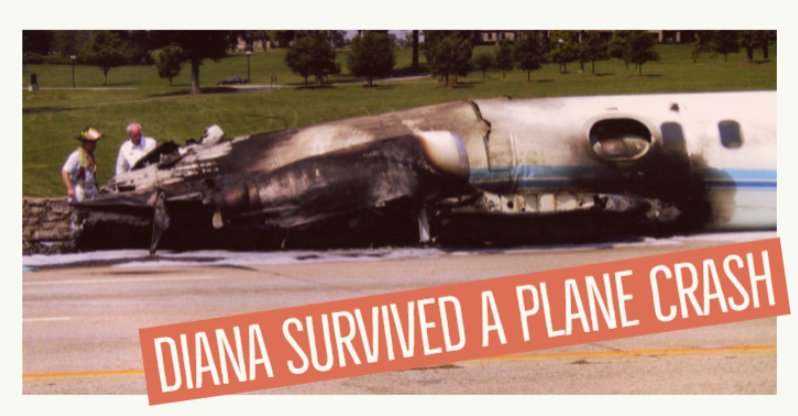 Lexington, Kentucky. 1 pm on a Friday, Labor Day weekend. Diana, a medical flight nurse, was sitting in a Lear jet. The pilot was unconscious. The co-pilot could not move because he had a broken back. Diana’s patient had died on impact.

The plane was sitting on Versailles Rd in Lexington, after it had just slid across the road on it’s belly. The landing gear was gone. The right wing had been ripped off the plane. And now that it had come to a stop, Diana knew she had to get the door open and get people out, because she could hear the crackling of fire, and the cabin was filling with smoke.

Except she couldn’t stand up, because she had a broken back and two broken legs.

I think you’ll hear from our conversation that Diana is pretty incredible. She’s the type of person who arrives and takes charge. She’s a natural-born leader who was born to help people who are in a bad situation. But for this story, that was turned around – she was the one in desperate need of help.

I want to thank our mutual friend Sandi for connecting me with Diana. Really, I continue to be surprised at the people and stories that are right in my own network.

And hang around after the conversation for a couple more things that might be of interest. I now have bumper stickers available, if you’d like to let everyone know about your favorite podcast. And, I recently appeared on another podcast hosted by my friends Glenn and Jamie, where we talked about this show and other podcasting-related stuff. That’s about a 15-minute interview that will play in full if you want to listen to it.

If you’d like to contact Diana with questions or to have her speak to your group or organization, you can contact her by email at flydi21@hotmail.com.

And if you’d like to be a supporter of this show, you can do that at WhatWasThatLike.com/support.