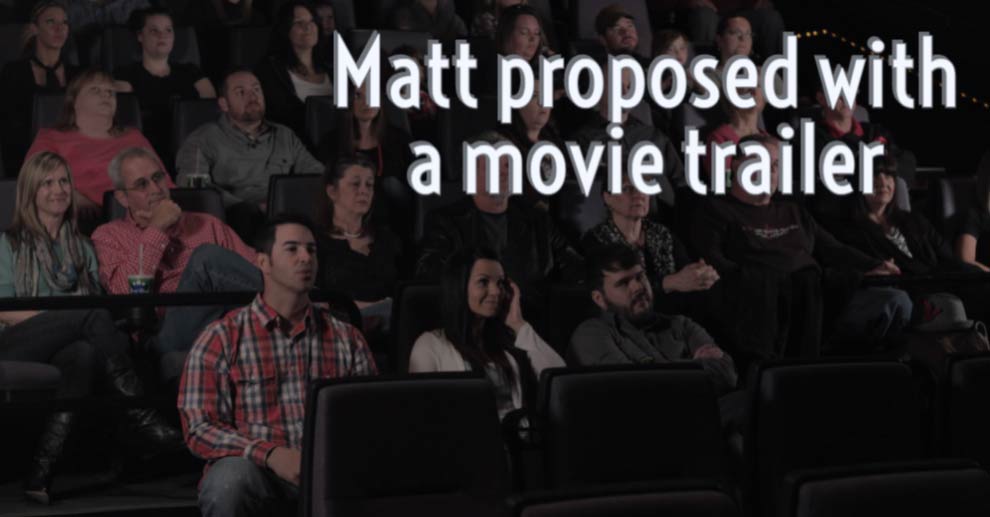 Matt proposed with a movie trailer

Today is February 14 and in most places around the world that means a special holiday – Valentine’s Day. If you didn’t realize that’s what today is, you might be in a bit of trouble with your special someone by the end of the day.

And since I knew I would have a new episode coming out on Valentine’s Day, I wanted to find a story that is related to love and romance, but would still be unusual and interesting enough to be an episode here on What Was That Like.

Then I came across Matt’s story of how he proposed to Ginny, and I knew I had to put this one on the show. You know how when you go to the movies in the theater, and before the actual movie comes on, you see the trailers to preview other movies? Well, Matt created his own custom movie trailer. And he got the movie theater to show it, right there in the theater. And Ginny, his girlfriend, was in that theater. And she had no idea what was about to happen.

The video not only shows the movie trailer that he made as part of proposing to Ginny, but it ALSO shows her real-time reaction as she watches it herself for the first time.

And actually, if you’re a member of our private Facebook group, you saw that I went in there a couple of days ago and posted this video so that everyone in that group could watch it AHEAD of time and be fully prepared for when this episode went live. Just one more reason you should be in that group!

Anyway, I think you’re really gonna love this conversation I had with Matt. I get a big kick out of talking with creative people who like to do things that are way outside the norm. And Matt is definitely outside the norm. His creativity with this proposal made this video go viral, and he and Ginny were invited out to Los Angeles and appeared on the Ellen show (in addition to a TON of other media appearances). Ellen even paid for them to honeymoon in Jamaica.

I had a great time talking to Matt, as you’ll be able to tell. And if you’d like to join the other listeners who support this show – for as little as a dollar per month – just go over to WhatWasThatLike.com/support.

Matt and Ginny on Ellen: