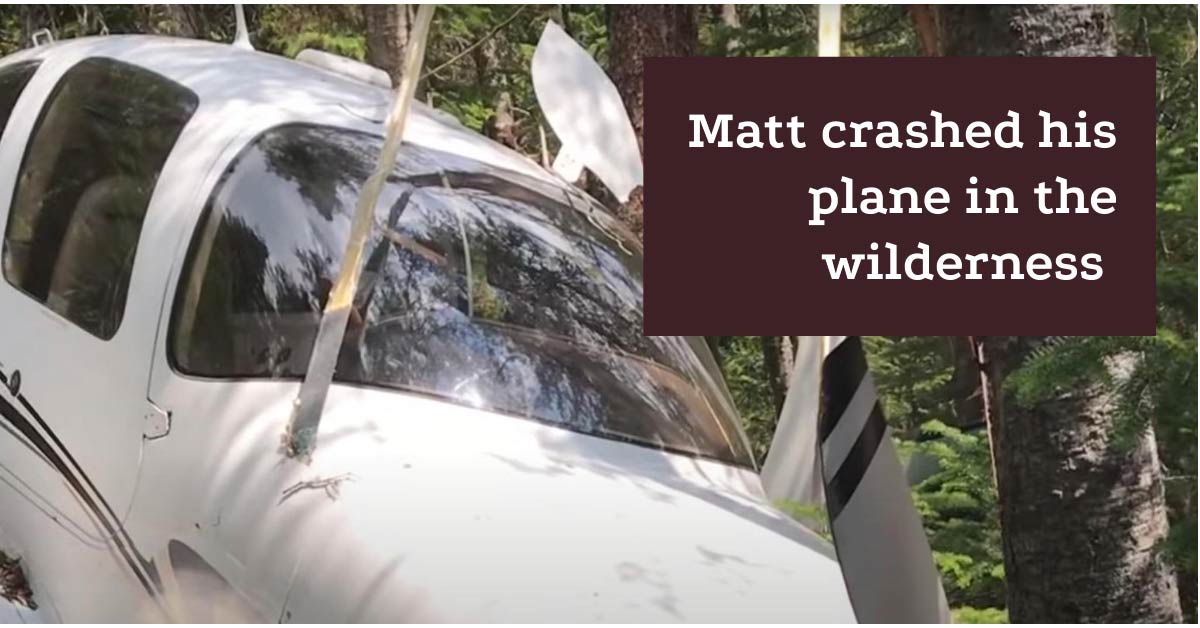 Matt crashed his plane in the wilderness

Personally, I’ve never had a fear of flying. In fact, I really like it. I’m not sure if it’s the flying itself, or maybe it’s the fact that the flying just means I’m probably going somewhere to see people or have fun.

But I’ve never had that feeling like “Oh…what if the plane just falls from the sky and we all die.” I don’t think I’ve ever worried about that. Which might be kind of odd, since I do have a fear of heights, but that only started after I fell off a roof. But that’s another story.

And if you’re on a flight and you’re sitting next to someone who is just terrified, it doesn’t really matter if you tell them how safe it is to fly in an airplane. I mean, there are around 100,000 flights that happen every single day all around the world. There’s really nothing to be afraid of.

But what if you’re on a flight…and there is actually cause for concern? Like, the pilot sees a thunderstorm ahead that you’ll be flying through, or maybe something is not working right on the plane, and he makes the announcement that the plane might be in trouble. That would probably scare most people.

That’s what happened on a commercial flight from Phoenix to Dallas a couple of years ago. The pilot didn’t say what the problem was specifically, but he came over intercom and gave the passengers the instructions to brace for impact.

Fortunately, the pilot was able to land the plane safely and no one was injured. But I’m guessing a few prayers went up, and some phone calls were made to loved ones. Can you imagine how happy those passengers must have been when they finally felt the wheels touch down on that runway, and they knew they were safe.

My conversation today is with Matt. Matt is a licensed airplane pilot. And there was one day when he was flying a small plane, and it was just him – no passengers. He took off and got up to cruising altitude, and for a while everything seemed fine. What Matt didn’t know was…that plane would never touch down on an airport runway again.

Matt’s video from the crash site: