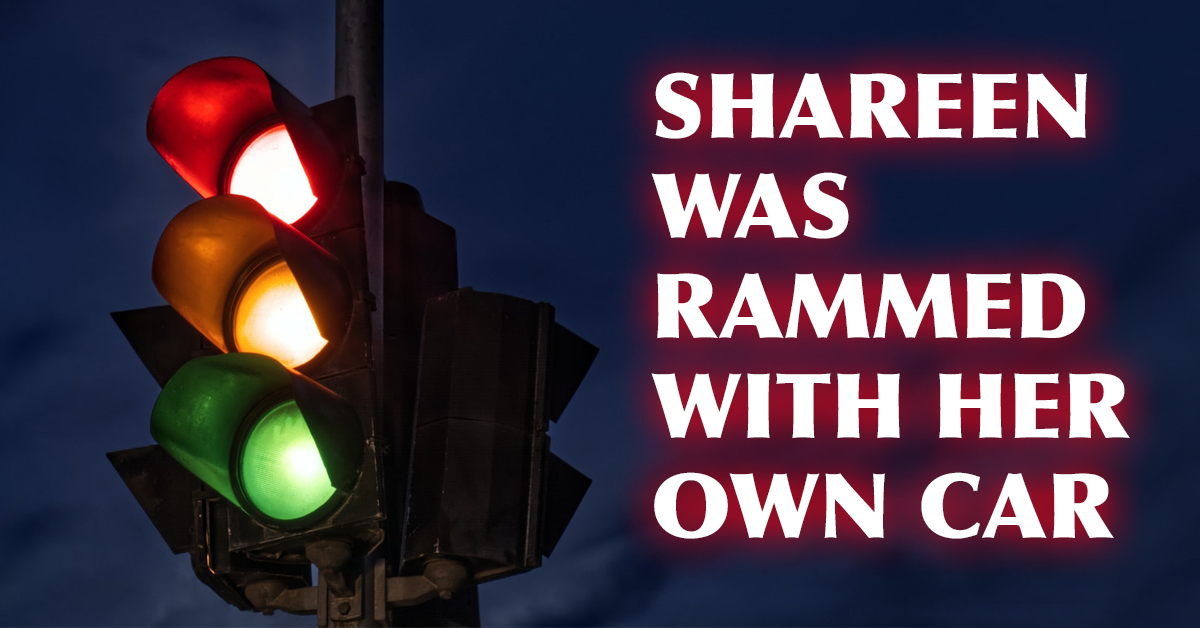 Shareen was rammed with her own car

I remember the first time I was ever exposed to domestic violence.

My home life growing up was very much non-violent. I was the oldest of 3 boys, and of course we fought sometimes just like all brothers do. But really it was more arguing than fighting. We never got violent with each other.

And my parents? I could never imagine either of them even thinking about hitting the other. It’s just not something that would ever be considered. They had been married for 56 years when my dad passed away in 2016.

So I guess you could say I grew up pretty sheltered from that kind of thing. I just never saw it.

But there was a time when I had a regular job, working in an office with probably 30 or 40 other people. This was quite a few years ago, and it was here in Florida, in downtown Tampa. I went in to work one day, and that morning I was surprised to see one of my co-workers, a young lady probably around 25 or so, had come to work with a bad black eye. Actually it was more than her eye – much of one side of her face was bruised and swollen.

And when I saw her, in my sheltered little world I actually wondered what had happened. I didn’t ask her about it, because we weren’t what you would call “close” friends, and it was really none of my business anyway. But later on as I heard others discussing it, I realized that she had been beaten by her boyfriend. And at first I was really surprised – like why would anyone do that? She’s such a nice girl, always smiling, always friendly. Didn’t make sense. Then I got angry. I imagined what it would be like if someone did that to my wife, or one of my kids.

So that was my first exposure to the results of domestic violence. But the reality is that it’s very, very common. According to the National Domestic Violence Hotline, more than 1 out of 3 women and 1 out of 4 men in the US will experience rape, physical violence, and/or stalking by an intimate partner.

That’s the situation that Shareen found herself in. She was in constant fear of Jerome’s anger and his violence. And she didn’t think there was any way out for her. Finally, she confided in a co-worker – and neither of them had any idea of the terrifying experience they were in for that day.

If you’re in an abusive or violent relationship, please tell someone. If you don’t have a person in your life you can talk to directly, here in the US you can get in touch with the National Domestic Violence Hotline. You can call them at 800-799-7233, or you can text the word START to 88788, or you can chat live with someone on their website at THEHOTLINE.ORG.

If you need website hosting, the company I use and recommend is Siteground (affiliate link).

For jewelry that’s beautiful AND earth friendly, go to AnaLuisa.com/WHAT and use the promo code WHAT for 10% off any item.