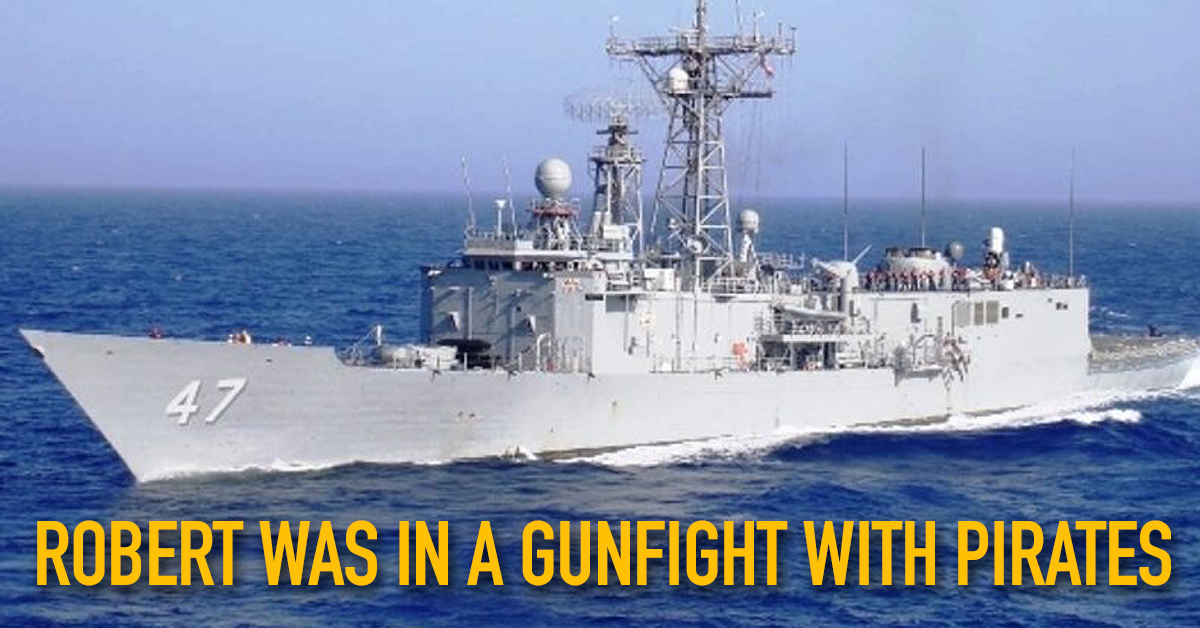 Robert was in a gunfight with pirates

Today’s story takes place off the coast of Somalia, a country in Africa.

If you look at Africa on a map, you’ll see Somalia on the east coast, right on the water of the Indian Ocean. In fact, of all the countries in Africa, Somalia is the one with the longest coastline. And for the Americans listening, to give you an idea of how big it is, Somalia is almost the same size as the US state of Texas.

But here’s the thing about Somalia. It’s considered to be one of the poorest countries in the world. I mean, here in Florida, we have homeless people. Some of you know, I work with a group here to help the homeless population get the things they need. But in Somalia, literally half of the people in that country don’t have a home or any kind of permanent residence. This means there are millions of people who are desperate, and hungry, and they’re vulnerable to abuse.

And just on the north side of Somalia is the Gulf of Aden. This is a very popular water route for large ships carrying lots of cargo, headed either to or from the Suez Canal. In fact, each year there are around 20,000 of these ships passing by. That’s more than 50 ships every single day.

So there’s a certain sector of the Somali population who sees all this valuable cargo going by each day, and they see an opportunity to make money. These are modern day pirates. They see many of these big ships as easy targets. I mean if there’s a large cargo ship carrying manufactured goods, they just want to get from point A to point B. They typically aren’t equipped to fight off or defend their ship from being hijacked and held for ransom.

But today we’re going to hear a story from Robert. There was a time he was on one of those big ships, off the coast of Somalia. The pirates saw it as easy money. What they didn’t see was that Robert’s ship, the one being attacked, was a warship in the US Navy.

This episode sponsored by BetterHelp online counseling – get 10% off your first month at BetterHelp.com/WHATWAS.

Reach more prospects by being a guest on podcasts! The Monetize the Mic conference, August 10-11, 2021, will teach you how to do that. Get your tickets at this affiliate link: WhatWasThatLike.com/conference