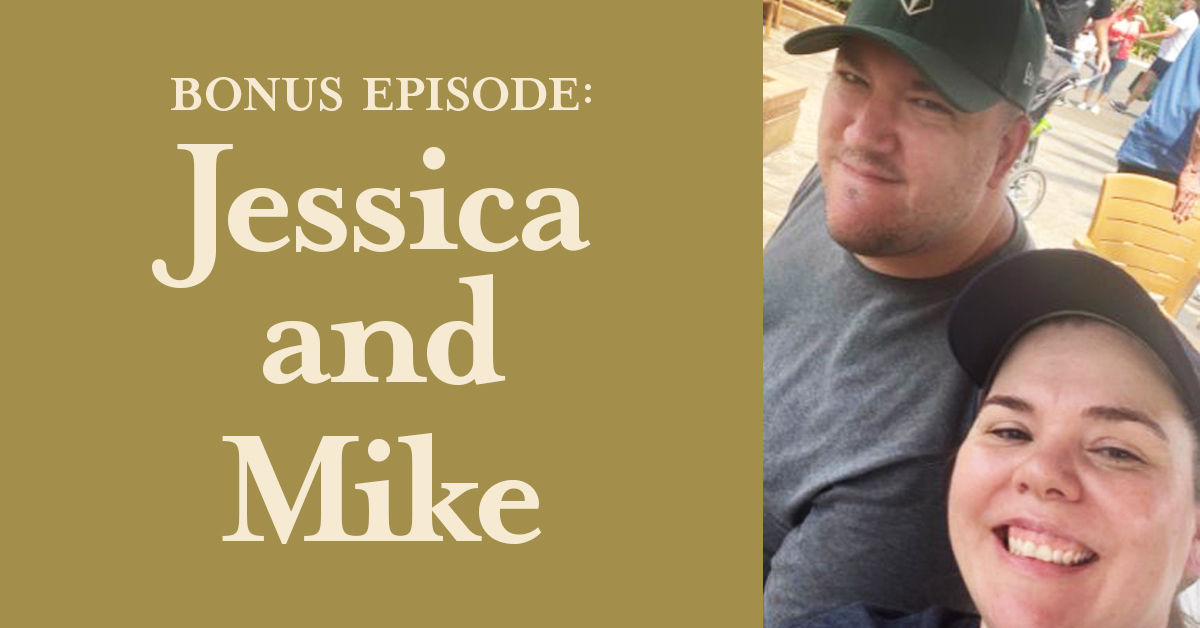 This is a bonus episode on an off-week Friday.

Today you’ll hear Jessica’s story of what happened to her fiancé Mike. Jessica and Mike have been together for seven years, and have five children.

After a short family vacation, Mike got sick and was unexpectedly diagnosed with Covid. He was unvaccinated. 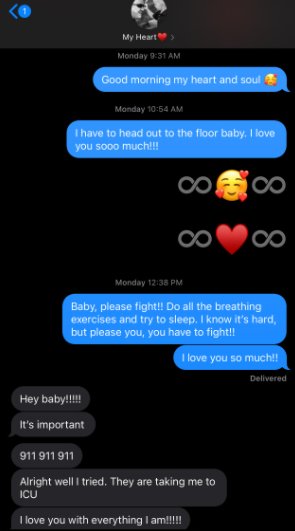 If you’re new to the podcast, this is not a regular episode. For most episodes, I have a conversation with a regular person who has been through some type of extremely unusual situation. A plane crash, a mass shooting, an alligator attack, or sometimes a happy story, like someone meeting their biological father for the first time. The guest comes on and tells the story of what happened, first hand. You can look through my past episodes and probably find some that interest you.

Today you’re going to hear Jessica’s story. And I’m not even going to set it up for you; you’ll understand as you hear it.

I’ll come back afterward with a few more comments.

Hi, my name is Jessica. For those of you who don’t know me, Mike is my fiance. We’ve been together for over 7 years now. I came into our relationship with 3 kids and we have since had 2 more, bringing it up to 5 amazing babies. We live in Las Vegas and our life works. We have a true partnership in everything we do. From making decisions to paying bills, from parenting to cleaning, we’ve always done it together and equally.

We went to San Diego July 12-13. It was to get the kids out of the heat advisory warning that Vegas had. Also because we actually had 2 days off in a row together. We went to the beach and to Belmont park and let the kids ride the rides. Everyone wound up getting sunburned. Mike got it the worst. His skin turned so red it was almost purple, and he got small water blisters all over. We went to the San Diego zoo the next day, then came home.

Mike called into work the next day. He was just too burned and couldn’t really move. Then he called in again. We were putting lotions on him and aloe and he was drinking lots of Gatorade. He was getting chills. He couldn’t eat, couldn’t get comfortable, and couldn’t sleep. All symptoms of sun poisoning. He went to the ER and tried to get some relief. The doctor pretty much dismissed him, so Mike went to work that night. The next day he wasn’t better, so he called in. Then he called in again on Sunday. He was showing no signs of getting better and he was nauseous.

Finally he went to a different ER on Monday and they tested him for Covid. He was positive. They sent him home, more or less with a pat on the head, and told him to hydrate and isolate and it would be fine. I had to tell my job that he tested positive, so they immediately sent me home and told me HR would be in contact with me to let me know the next steps. I went and got tested, which came back negative. Mike was absolutely miserable. He was beside himself with how much everything hurt and how scared he was. He wound up waking me up at around 3 a.m. to tell me he can’t breathe and is dizzy. When he tries to stand he starts to fall over. I rush him to another ER and they admit him immediately. They told me I couldn’t stay. His blood oxygen was at 72% and they told him they were surprised he was even able to walk and talk. They did scans on him and found he had pneumonia in both of his lungs. He was placed on the highest level of oxygen the hospital could do. By the end of the day they said he needed more than they could give, and needed to move him to a different campus.

He’s still not able to sleep or rest at all. He was barely texting me back. He sent me a text message that said, “I should’ve gotten the damn vaccine.” They told me I could bring him some stuff if I want to but that I can’t go in to see him. I took him some chargers, his iPad, clothes and deodorant, since he asked for it. Now they had him on 2 machines giving him oxygen and alternating with a full mask. They told us he can’t have any sleep aids because they need him awake to monitor his lungs. I understood that but also knew he needed to rest. He still wasn’t eating and they said he needed to be moved again to some place with a bigger ICU unit that can focus more on him. No one gives us any kind of good news.

They moved him onto a breathing machine to force his lungs to open more. It was Sunday and he had been in there since Monday night. I had to go back to work Monday. He and I were texting Sunday. He said he was tired around [8:30] and was going to try to get some sleep while his body seemed to be telling him he could. I was, of course, good with that. I texted him when I woke up. He didn’t answer. I texted him again when I got to work. No answer. I am worried now. I called the hospital. They told me they don’t do updates until after 2 p.m. and it was only 11. I said, “Please! Just tell me if he’s ok!” They tell me they will call me back. It took almost an hour and of course I’m working, so I can’t answer. As soon as I got a break I called them back. The nurse told me Mike was stable but that they were having a doctor come to evaluate him later, and that they were probably going to recommend intubation and sedation. I told him, “Please have Mike text me.” He said he would pass on the message. Within 5 minutes of me being back to work, he sent me the messages, “911. 911.” Then he was calling. I told my supervisor, “I need to make a call right now.” I called Mike. They were taking him right then. Not  tonight, right now. I cried and told him to please fight. He said he was. He told me he loved me and I told him I loved him so much and to, “Please, please, please fight! Come home to me!” That’s the last time I’ve been able to hear his voice or communicate with him.

I went to the ICU that night to see him, after getting one of the worst phone call updates ever. The nurse even told me to contact next of kin and to take all of his belongings home with me. They said he fought the sedation and they had to use a paralytic. He was strapped down to stop him from fighting. His numbers were showing a bit of improvement from when they said he had to be intubated. They only let me stay for a few minutes and then rushed me out. The next morning I was pulling into the hospital parking lot and the infectious disease doctor called me to ask me about treatments and to tell me how bad Mike’s numbers are. I asked if he had anything positive to tell me, and he flat out said, “No.”

Once inside, I had to wait to be cleared through since he was in isolation. When I got to his room, the nurse was nice. He explained a lot to me. I commented that Mike’s O2 numbers were in the 70s the day before in the morning, and the machines had brought him up to the 80s, and now they were in the 90s. That seems like an improvement. He said, “Yes it is, but it’s artificial. The machines are doing everything for him right now.” I said, “Well, that’s what they’re supposed to do right? I’ll take that as a small win and something to hold on to.” I went in this morning. His numbers were the same and the nurse said his kidney function was slightly better than yesterday, but that he’s had no other improvement. He still had a low grade fever being maintained with a cooling blanket. They were able to get his feeding tube in while I was there.

I just needed to have him home with us. He is my person. My heart and soul. He is the rock of our family. Please, hug your loved ones, because it turned so fast. I would give practically anything to hear Mike say my name and hug me, and be able to tell him I love him more than ever.

The next day, Jessica had this update.

I just wanted to reach out and thank all of you who have helped us. Everyone who has reached out with a friendly word. I was at the hospital visiting Mike and telling him all about our kids’ day and how everyone was pulling for him. His numbers crashed. They were not able to bring them back up. The love of my life, my rock, my everything, the father to my babies, is no longer with us. I don’t know what to do.

Jessica said that she and Mike had never intended to NOT get the Covid vaccination. But they were waiting for one year from its release, to see about any side effects. Now, she and her oldest son have both been vaccinated, and she says she will always regret not having gotten the shot earlier.

So Jessica now finds herself as a widow and a single mother. If you’d like to help, there’s a GoFundMe page set up where you can make a donation for her and her children. You can get the link for that, along with some pictures of Mike, Jessica and their kids, at the web page for this episode: WhatWasThatLike.com/85

This bonus episode was produced because I saw Jessica’s story in a news article, and I wanted to help. The story you heard was what she wrote for GoFundMe, and it was performed by a voiceover artist with Jessica’s permission and gratitude.

I’ll be back with the next regular podcast episode in one week. Stay safe, and give someone you love a big hug.